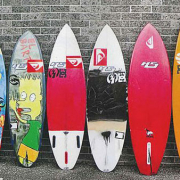 I love looking at the sea. I especially love watching surfers. Sometimes they’re met with one wave after another.  Sometimes they wait.  But even as they wait, they’re preparing for the next one to arrive. They know another one will come at some point; they just don’t know when it will start to build again.

A surfer’s mindset is an excellent one to model as the basis for transformation. Every day I talk to people who genuinely want to change their lives but fail to look out for and catch the “waves” as they arrive. The fact is that in every life there are waves we can ride that bring us joy and gratitude. But first, we have to catch them. We have to anticipate their arrival and then prepare. We need our surfboard, for starters. Swimsuits are optional but highly recommended because waves can be turbulent, especially the big ones.

The first and most essential element for catching a successful wave is to not only know that they are coming but to keep looking out for them, even during the flat and uninspiring spells that are part and parcel of every life.  Most people spend most of their time focused on what’s wrong so that when a wave starts to build they miss it. This is why we need to understand that success comes in all sizes just like waves. It can be as simple as the first smile on your newborn’s face or a conversation with your boss in which he/she is sizing you up for that next promotion. But if we’re focusing on what could go wrong or what has gone wrong in the past instead, we will miss it.

What swells did you miss today?

Rethinking success for ourselves is akin to grabbing our surfboard. Are you going to use an undersized board that makes it hard to catch small swells, or are you going to make yours is a massive yacht-like one available for even the smallest rise? It’s really up to you, but I can tell you which one is more useful. To re-size our board, though, requires us to look inside to determine how we are currently defining what is good and bad in our lives. If our board is too narrow, we will surely set ourselves up for many flat days of waiting… waiting for the next wave that we consider to be good enough. Managers are especially good at focusing on problems; most believe that it is their job to solve all of their direct reports’ problems. In this way, they concentrate on what is constantly going wrong and feel frustrated and eventually deflated when all they see is flatness: not a single wave in sight.

Managers become leaders by surfing with the team.

Excellent managers know they must ride the waves too. Sure, they deal with difficulties as they arise, but, more importantly, they catch success. They practice this by preparing for it. So, for example, when they hold 1-1s, they focus first on catching waves, rather than sizing up the rocks. I call this the 75/25% rule. Three-quarters of your time needs to be spent on catching what is going well and drilling into that to inspire your people to keep going. The remaining 25% is then incredibly productive time to re-think what isn’t going well and to brainstorm solutions.

Catching success is inherent in every good coaching conversation. Because once you catch success in whatever size it arrives, your relationships improve tremendously. People relax in your presence and stop trying to hide mistakes or dodge blame. Another way to say this is that your 25% actually starts to work; it becomes more solutions-savvy and effective than if you had started elsewhere.

Now, most New Zealand leaders I coach are stunned at first when I say this to them. “Can’t I just do 50/50?” they ask. This is because, as a country, despite the fact that we’re surrounded by great waves, most people are too focused on the rocks to see them, let alone appreciate them. But the research clearly shows that the cost of this is high.

Dr. John Gottman (University of Seattle) has studied what makes marriages work for the past 40 years. In fact, he can predict just from watching the first three minutes of a recorded conversation between a couple whether or not they will divorce, and, if so, by when. Remarkably, his accuracy rate is 86% for both counts.  The results of Gottman’s six-year longitudinal study discovered that a harsh start-up was one of the greatest predictors of a broken relationship.  Gottman found that when we start with problems (the 25%) instead of positive appreciations (the 75%), the person we’re talking to switches off and begins to unconsciously defend themselves often in subtle and undermining ways.  So, softening your start-up becomes a valuable tool to keep our relationships on track and to better enable us to solve the problems we so desperately want to overcome. In other words, when we delay the discussion of problems until after appreciations, people actually start to listen.

Soft start-ups by themselves aren’t enough if you’re still staring at the rocks.

From what I’ve experienced, if you’re only focused on conversations start-ups, though, it doesn’t work in the long run.  That’s because we’ve not actually shifted our perspective. We’re still staring at the rocks. Because we’re not doing it with the integrity upon which catching waves is based.  When you’re only thinking about giving praise rather than catching success it’s easy to do so poorly, and people will see right through it. I’m not talking about positive, Pollyanna stuff here, I’m talking about anticipating and planning to acknowledge what is good in our lives. Appreciating this in ourselves and others. We can still hold people accountable, but if we truly want to achieve new results then catching success is at the heart of this.

Get in touch if you’d like help making a plan and getting prepared to catch your next wave.