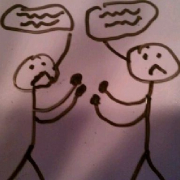 Criticism is sulfuric acid for love.

After 40+ years of conducting research on what makes relationships last, Dr. John Gottman has this to say about it. Personally, I like to say that criticism is a weapon that we use against the people we love the most.

Urban Family founder,  Shantel Patu, describes the abuse perpetrated by a partner wielding contempt in her blog “Can Words Really Hurt Me?” The answer, according to a recent German study, is yes: words actually change our brains. Researchers found that critical words or words associated with pain activate the fight, flight, or freeze trauma pathways in our brains. So, we have to remember that it’s not just sticks and stones after all.

An extreme form of fault-finding (or what Dr. Gottman refers to as contempt) is highlighted in the movie “Who’s Afraid of Virginia Woolf?” based on Edward Albee’s 1962 play.  And even though no actual blood is shed in the film, the destruction of the human soul in the face of biting disdain is obvious. In the case of contempt, the person uses it to dominate and demoralise the other.

But there is another type of reproval that is much more commonplace and is not undertaken as a deliberate means of hurting someone, even if it’s harmful nevertheless. Instead, this type of bread and butter beration lurks in most loving relationships and even flows from the lips of the most loving parents. This is the type I want to explore here because I get so many clients who are fluent in fault-finding, especially when they are under stress. And they feel terrible about it.

“You never clean up your mess!” “What is wrong with you?” “You’re never nice to your sisters!” “You’re so ungrateful!” “You never listen!” “Why don’t you ever support me?” “You’re always late!” etc., etc., etc.  Even though they mostly come from a genuine place, these examples of everyday criticism undermine relationships faster than you can finish saying them. In other words, they don’t work.

Not once has being critical actually achieved what I wanted it to: change behaviour.

This is because critical remarks disconnect us from one another, and people don’t shift when they feel judged; they just become resentful. Criticism is most often packaged in “you always” or “you never” statements. Even if you don’t mean it that way, the underlying message is that the offending person hasn’t simply offended, but actually is offensive.  Unsurprisingly, this kind of attack often triggers deep defensiveness and leads to a cycle of conflict that is hard to escape.

So, what can we do about it?

For those of us who speak scorn fluently, it’s not enough to understand the detrimental nature of criticism; we need help to actually do something differently. And the place to start is with the understanding that . . .

When I’m being critical it’s me, myself and I that has the problem, not the other person.

In other words, criticism is the negative expression of an authentic need in you. But in critical moments,  we’re unaware of this. We just think that we’re expressing an opinion and trying to get change. The truth of the matter is that the person you’re criticising doesn’t have an issue, you do.  I know this is a sobering realisation, but at least it’s a more honest one. Because unconscious dishonesty is behind every critical remark.

When I’m critical, I experience heightened frustration, anger, contempt, etc. that I’m not owning or taking responsibility for.  So, I disguise my feelings behind judgmental remarks: taking the moral high ground or, my favourite critical technique: lecturing.

Criticism is a wish disguised.

If we look at criticism as a wish disguised, it becomes a communications problem. It’s trying to express your feelings and longings to another, and doing so ineffectually. What if, instead, you could take responsibility for what you really want in your relationships with your children, partner, or boss? What if you could own your upset and change your “you nevers” to “I would love it if you would…”?

The first step in changing our critical ways is to recognise them for what they really are: our own upsetness in disguise and then to re-phrase them into clearer and more helpful statements of what I am feeling (“I’m frustrated, mad, sad, lonely, scared,…”) combined with a clear request or a longing (“I’d like…”) and, ideally, an invitation (“What do you think?” “Can we talk about this?”)

If you’d like help converting your critical ways, get in touch. Because once you transform your contempt into something more useful you transform all of your relationships. In this way, you also get to focus on expressing what’s really going on for you. And you will feel a whole lot better, too.