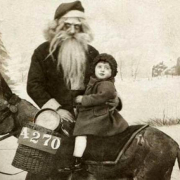 Even if you don’t want your 5-year-old to read this, releasing the lies you’ve lived by is life changing.

For those of us who grew up with Christmas and all of its festive trappings, we can learn a lot by releasing untruths just like we did when we figured out that Santa was fabricated. A boy at school broke the news to me late in the piece.  At first, I thought there’s no way. Santa had to be real. Mom and Dad were so convincing! And what about the Easter Bunny? Surely not the Tooth Fairy. It took me a bit longer, however, to figure out that the story my parents told me about that stray and her puppies we’d found on a remote Alaskan beach who “had gone to a sweet old lady who’d love them dearly” was also untrue.  I forgave my parents because I understood that they were doing the best they could. I knew they were building up a gift-giving, fictional guy in a white beard out of love and a sense of magic.  The Santa lie was relatively easy to let go of.

But, what about the other beliefs I’ve held sacred?

These aren’t so easy to dectect, especially in adulthood. In Neuro-Linguistic Programming (NLP) we call these Limiting Beliefs: beliefs, states of mind or accusations about ourselves –and the way things supposedly are — that restrict our potential.  In other words, they keep us unable to fully embrace and live life in joy and love of self and others.

Here are a few that I grew up with:

None of these are objectively “real” unless I make them so. But, more importantly, none of them are helpful in creating the life I intend to live. This alone makes them “lies.” Each Limiting Belief that I held sacred at one point of another needed to be released or I would not be writing this today. But what about all of the ones we never find and question?

Transformation happens when we examine the assumptions by which we live.

I know you probably don’t believe in Santa any more, but what about those lies that sneak into your consciousness that you don’t notice, such as “I don’t have enough time,” “I’m not smart enough” or “I’m too old?” Arriving first thing in the morning at wake up, mine would cause a chronic, low-level of unease and grouchiness. The lies such as “this job is killing me,” “I don’t have what it takes,” or “there’s no point to any of this.” They weren’t in any way helpful.

Let Go of The Lies

What limiting beliefs have you carried around from childhood or picked up more recently? Here’s an article by Dr. Phil exploring the lies we tell ourselves. He says,

If you’re a hammer, everything looks like a nail.

This means you’ve got to put your hammer down to change your life. In dropping mine, I spent the last four months on “retreat,” taking a much-needed sabatical from New Zealand’s collective “I’m not safe” mindset and my coaching practice. During this time, I discovered “lies” about myself and world at large that coloured my perceptions and limited my life. Lies such as: “I’m not okay unless I’m in control.”  This has been a big one for me.  But it’s simply untrue even if it has been persistent.

What’s helpful for me?

When we start to untangle the lies we hold, some of them unfold gradually like a soft gentle breeze, transporting us to a place of deep knowing.  Others are more of an abrupt explosion like when a star is born.  In an instant, the deception that tainted your mind, controlled your feelings and squashed your joy vanishes. It really does work this way.  As we begin to see the world through the “not everything people in authority tell us is true” lens, we change or “shift” as health coach and author, Jamil Frazier, calls it in The Twelve Shifts.

The storm subsides and the sunshine breaks through, allowing you to see the world differently. In this new state, there is a distinct sense of peace and understanding as we realise the truth untethered by lies: truths, such as — even as we suffer — we are perfect, whole and complete exactly as we are, and we’re part of something much bigger, more sacred and meaningful than we understand.

These more uplifting beliefs may or may not be true existentially. We may never know, but it really doesn’t matter.  They lift me up and help me live up to the very best version of myself. They inspire and shape my highest possible self from which I know my true value and purpose for being here.

In a nutshell, they make me happy just like Santa did when I was a little girl.